From 1986 to 2001 there was the “Duncan and Deep Canyons” course which included the significant Duncan Canyon but also some relatively easier gravel roads between Robinson Flat and Last Chance via Cavanaugh Ridge and Deep Canyon.

From 2002 to 2005 the “Star Fire” course was used when Duncan Canyon was closed due to the 2001 Star Fire. This course had a fast gravel road section from Red Star Ridge to Robinson Flat which cut off some mileage. 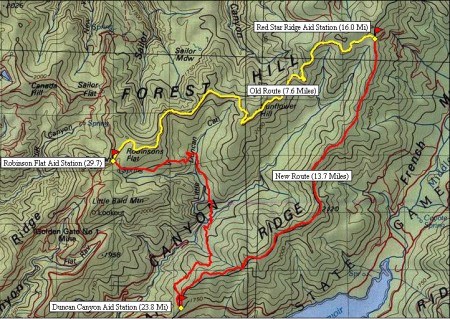 To keep the mileage at 100.2 we did a loop around Little Bald Mtn on new single track, still did the Cavanaugh Ridge route through Dusty Corners but added a few more miles on single track Pucker Pt Trail to Last Chance. Finally, after much volunteer work to get Duncan Canyon re-opened, the current “Miller’s Defeat” course uses new trail from Robinson to Dusty Corners while still using the popular Pucker Pt trail. This has the most single track of all the courses and is arguably the best course.  So how do the times compare on these three Cal St courses?  The general consensus is that the Star Fire course was probably the fastest, the Duncan and Deep Canyons course a little slower, and the current Miller’s Defeat course the slowest of the three.  Perhaps the difference between the Star Fire and Miller’s Defeat courses is only in the 10-20 minute range, which is likely to vary between runners. 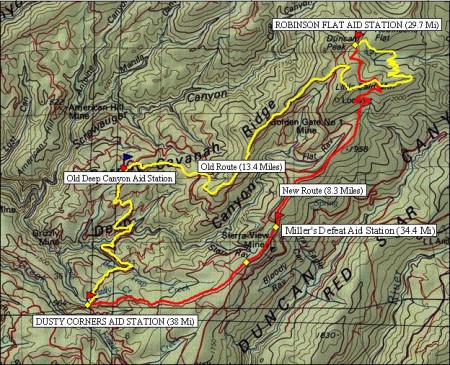 There is also the alternative Original Snow Route which has only been used three times. It basically cuts out Duncan Canyon and Robinson Flat by running down Mosquito Ridge Rd and then N44 to Dusty Corners. This was first used in 1983 on the 93.5 mile course, and then again in 1995 and 1998 on the Duncan and Deep Canyons course. In 2010 a new Snow Route A was used for the first time. While still 100.2 miles the route bypasses Lyon and Red Star Ridges and runs along French Meadows Reservoir on roads and single track before joining the current Miller’s Defeat course at Duncan Canyon.  This route is arguably faster than the current Miller’s Defeat course, perhaps about the same as the Star Fire course.  And then again in 2011 a slightly different snowroute was used as we couldn’t get into Robinson Flat due to very heavy snow. We call this one the Snow Route B.