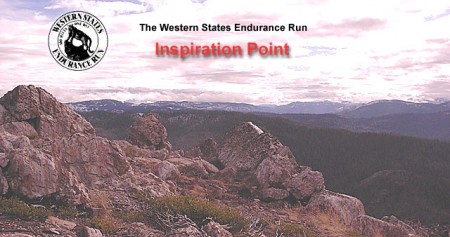 “Your days are short here; this is the last of your springs. And now in the serenity and quiet of this lovely place, touch the depths of truth, feel the hem of Heaven. You will go away with old, good friends. And don’t forget when you leave why you came.”

— Adlai Stevenson, What I Think (1954), delivered at Princeton University Commencement, 1953. Read at the conclusion of the annual Western States Endurance Run awards ceremony.

“It is not the critic who counts; not the man who points out how the strong man stumbles, or where the doer of deeds could have done them better. The credit belongs to the man who is actually in the arena, whose face is marred by dust and sweat and blood; who strives valiantly; who errs, who comes short again and again, because there is no effort without error and shortcoming; but who does actually strive to do the deeds; who knows great enthusiasms, the great devotions; who spends himself in a worthy cause; who at the best knows in the end the triumph of high achievement, and who at the worst, if he fails, at least fails while daring greatly, so that his place shall never be with those cold and timid souls who neither know victory nor defeat.”

— Theodore Roosevelt, Citizenship in a Republic, Address at the Sorbonne, April 23, 1910.

“What they had done, what they had seen, heard, felt, feared – the places, the sounds, the colors, the cold, the darkness, the emptiness, the bleakness, the beauty. ‘Til they died, this stream of memory would set them apart, if imperceptibly to anyone but themselves, from everyone else. For they had crossed the mountains… “

— Adapted from Bernard DeVoto, The Course of Empire (1952)

“Now and then nature produces a combination of land, water, sky, space, trees, animals, flowers, distances, and weather so perfect it looks like the hatching of a romantic fantasy. Every time we go out into the wilderness, we are looking for that perfect, primitive Eden. This time, we have found it.”

IN RACE OF ENDURANCE, A VICTORY OF THE SPIRIT
Antonio Rossmann

Squaw Valley, Calif. Shortly before 5 o’clock Saturday morning, a few hundred of us will present ourselves to the staring line of the Western States Endurance Run.
A shotgun blast precisely on the hour will send us westward along the Western States Trail – 19,000 feet up, 21,000 feet down, 100 miles distance. Our goal: to traverse the Sierra Nevada and the mighty canyons of the American River, arriving in the Gold Rush town of Auburn in under 24 hours. Our ostensible reward: the most coveted emblem of the endurance athlete and symbol of the world’s most demanding sports event – a sterling silver belt buckle that proclaims, ‘100 Miles One Day.’

This award of mere metal alone does not draw us back each year to these mountains and their task. The greater award is that of the spirit. Material return and public glory might explain the pursuit of other human ambitions – be they public office, corporate control, individual wealth or even an Olympic championship. When this day is done, however, and the last Western States finisher enters Auburn’s high school stadium, each runner will have celebrated a personal victory of nobler dimension.

For the Western States 100 is terribly honest in its demands and rewards. During these two-dozen hours in the wilderness we will be governed apart from the world of political favors, hidden agendas, and orchestrated cheers. Our number – which includes woodsmen, ranchers, nurses, investment bankers, mechanics and computer engineers – will all be measured on the same scale. We will test ourselves against the mountains.

Along the emigrant trail of granite clefts, majestic forests and pristine streams we will feel the presence of the Paiute Indians, the mountain men, gold miners and pioneer families. As morning gives way to afternoon in the lower elevations, where oaks and grasses replace the tall pines of the ridges and where rivulets merge into the defined forks of the American, we will encounter the oppressive Central Valley heat working its way up the canyons. When dark and coolness come, our way along the silent trail will be marked only by flashlight and the distant lights of Auburn.

By the time we reach the finish we will have found, both physically and mentally, as many valleys and peaks as mark the trail. For those who come into Auburn arrive with a rare grace. The runners who press through the weary and lonely hours can get through only if they are tough and at peace with themselves. But we could not endure without the unspoken support of our companions on the trail and the palpable support of friends who waited with aid at the checkpoints, paced us through the night and kept us on the trail this day and months of training before.

To the extent that an endeavor like this must finish with a formal ceremony, Sunday afternoon will find us cleaned-up, euphoric and exhausted at the Placer High School. There we will celebrate the award of each buckle and plaque. But we will also openly celebrate those who didn’t make it as far or as fast as planned. We know that between Squaw Valley and Auburn lurk snow crevasses, sharp rocks, bears, cougars, rattlers, skunks, darkness and the extreme frontiers of the body and the mind. Having encountered these before, each of us can affirm that we achieve more in victory or defeat than in staying home to risk neither.

The highest award of Western States becomes a self-assurance that celebrates this event before it begins. In spite of the distinction of that silver buckle, and perhaps because of it, Western States proves that honor lies not so much in reaching the finish as in daring to arrive at the start.