Here are the results of the independent WSER Runner Survey from the June 28-29, 2014 race, conducted by ultralive.net.

All runners have to go through check-in the day before the race in Squaw Valley and we positioned the survey team at the end of the process: right after the “mug” shot and right in front of the entrance to the Western States store. Participation was very good (93% of starters) and we were able to correlate the data to finish times to make the analysis even more interesting.

For sub 24 hour finishers, 37 out of 116 (31.8%) finished in the 23rd hour of the race to get a silver buckle. In the last two hours of the race, there were 75 (27.2%) finishers. The busiest times on the track are between 4-5 AM and 9-11 AM on Sunday morning.  The graphs show the distribution of finishers by hour (14 hours to 29 hours). The first graph shows the average number of years running ultras compared to finishing time. The data implies that the number of years of experience does not correlate to a faster or slower finish time. The second graph shows the number of runners utilizing a crew or pacer compared to finishing time. Basically everyone uses a crew and pacer and the numbers correlate directly with the number of finishes in a given hour.  Of the survey participants, 22 finished without a crew (7.9%) and 27 finished without a pacer (9.7%). And 10 (3.6%) hardcore participants finished without a crew and pacer. 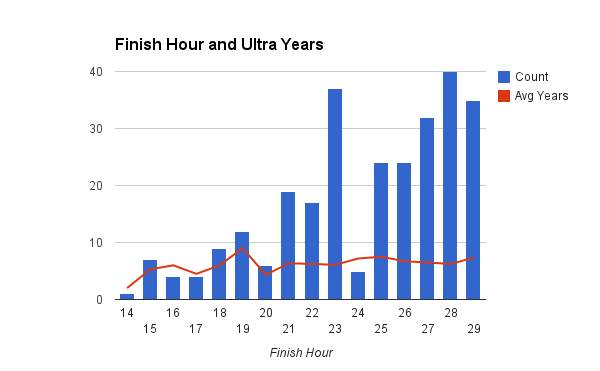 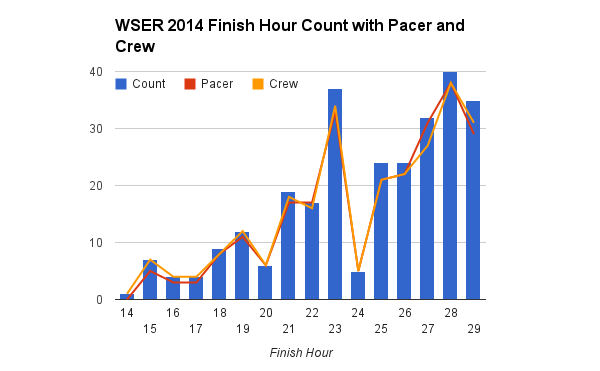 Hoka was the dominant shoe for all finishers regardless of the group. Of note, Brooks was a strong second when you look at all finishers but not a big contender for the sub 24 group. Pearl Izumi was in the top 3 for both groups of finishers. 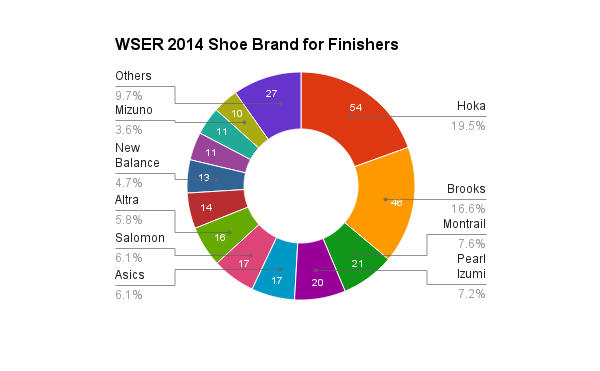 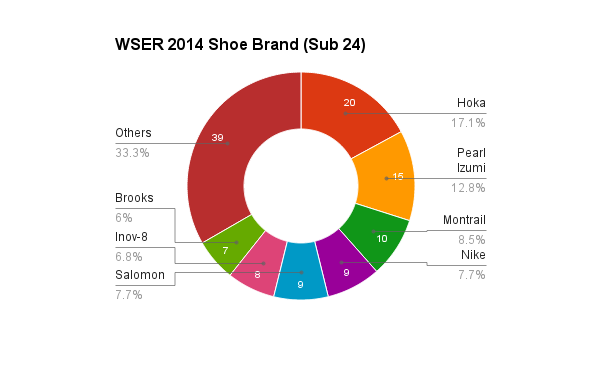 Injinji was the clear choice for both the overall and sub 24 groups. Drymax was second in both groups as well. Nearly half the finishers wore these two types of socks. 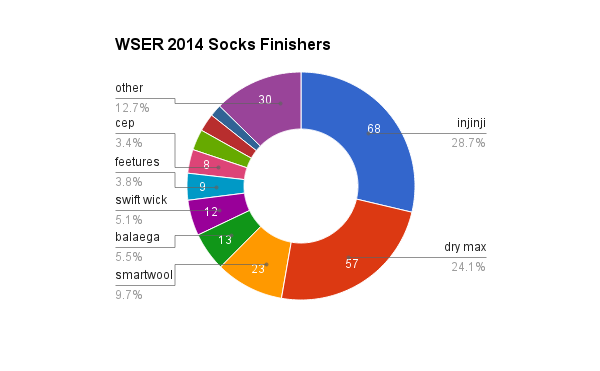 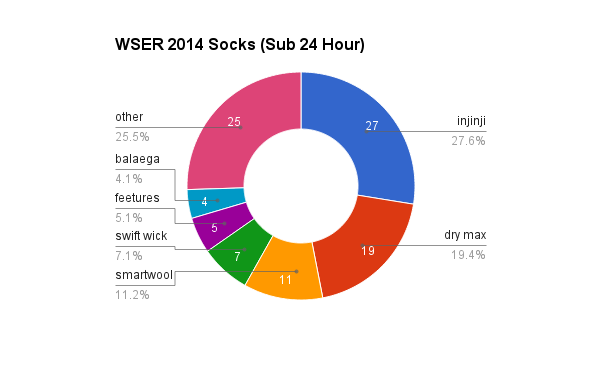 Either you don’t need a coach to finish WSER or there is a huge untapped market out there for the coaches. You decide. With or without a coach your chances of a sub-24 and finishing are about the same. 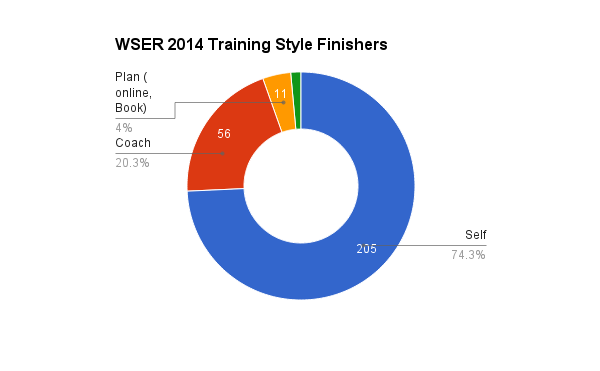 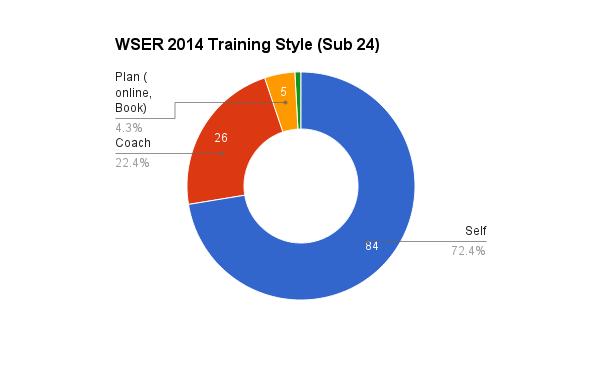 Petzl is the clear leader with Black Diamond a strong second. Almost everyone uses some kind of headlamp and about a quarter of the finishers use both a handheld and headlamp.

The first 9 finishers of the race didn’t need a headlamp as it wasn’t dark enough yet. M10 was the first “headlamp” finish. 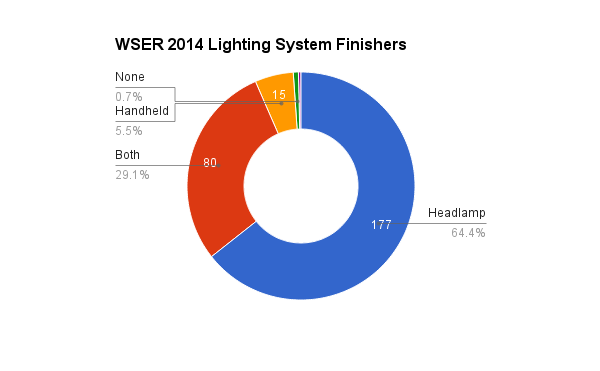 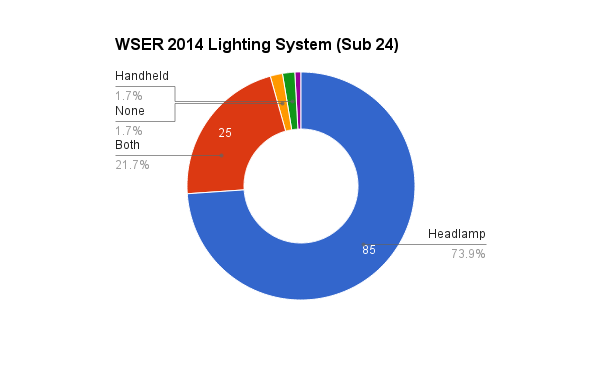 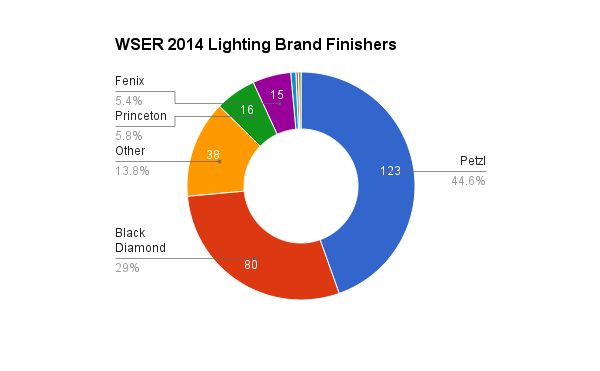 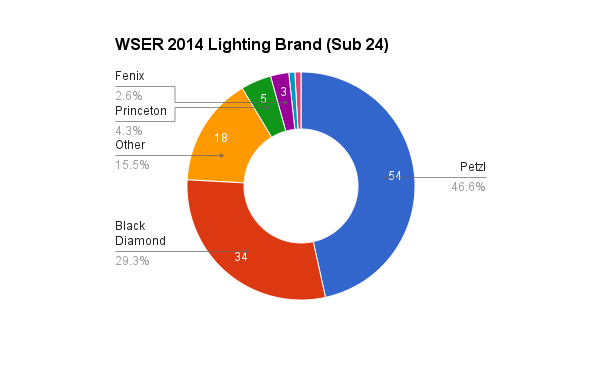 Bottles are the predominant mode of hydration in the race. Nearly three-quarters of finishers (overall and sub 24) use a bottle. It seems that the hydration belt is definitely out of favor these days when you have such a large selection of hand held bottles and/or hydration packs to choose from for carrying liquids. 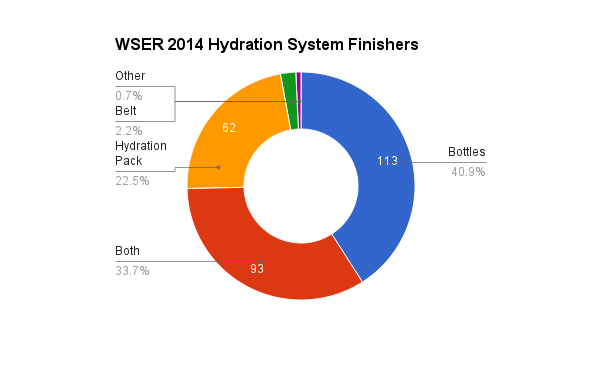 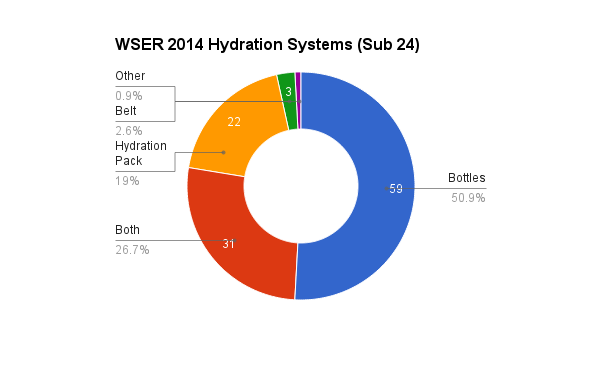 Many thanks to the ultralive.net survey team: Kara Teklinski, Monique Winkler and Dana Katz.

Posted in General Interest, Surveys | on: April 5th, 2015 by Craig | Comments Off on 2014 Runner Survey Results