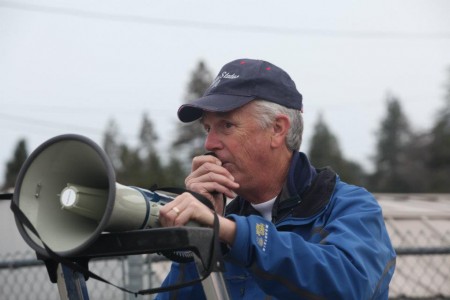 Soderlund, who began his career at Western States in 2000, will oversee the December lottery and then will retire. Craig Thornley, who served as assistant race director in 2012, will take over for Soderlund.

“It has been an honor to direct a pinnacle event in the sport of ultrarunning for the past 13 years,” Soderlund said. “I will continue to be involved with the event and will assist Craig and the Western States Board in any way I can. The past 13 years have been a remarkable journey, and I thank the Western States Board for their trust and guidance. I have been inspired both by the runners and our 1,500-plus volunteers and the amazing growth the sport has experienced over the last decade. I extend a special thanks to our tireless and selfless volunteers — without their dedication to the runners there would be no event.”

The 2012 edition of Western States was just one example of Soderlund’s focused, athlete-centered race direction. Men’s and women’s course records were set by Timothy Olson and Ellie Greenwood, while the race also saw a record number of finishers and the most sub-24-hour silver belt buckles ever awarded in the race’s 39-year history.

“Greg has set an incredible standard for 13 consecutive race cycles,” Western States Board of Trustees President John Trent said. “Our race has been blessed to have someone of Greg’s abilities directing our race. I may be a bit biased, but I believe that Greg is the best race director in the country.

“The thing I will remember most about Greg is his belief that every runner who toes the starting line at Squaw Valley on the fourth Saturday of June should have the experience of a lifetime while running our race. Amazingly, for 13 historic race cycles, he’s always been able to accomplish that goal. For that reason, and much more, Greg’s legacy is simply remarkable.”