by John Blue
Originally published in UltraRunning magazine. Reprinted with permission.
You’ve got a few hours to kill so you find your way to a favorite trail. You lace up your shoes, grab a water bottle, and disappear down the single track. Fir needles and dirt crunch under your feet as the troubles you took home from work slip your mind. You relax into the run and your breaths come easier.

Then you round a bend and see something crumpled on the ground next to the trail: the spent wrapper of an energy gel. Instinctively, you touch the pocket in your shorts and feel for the gels you’ve packed along for the run. You no longer feel so much a part of nature as you feel a part of a dysfunctional family. 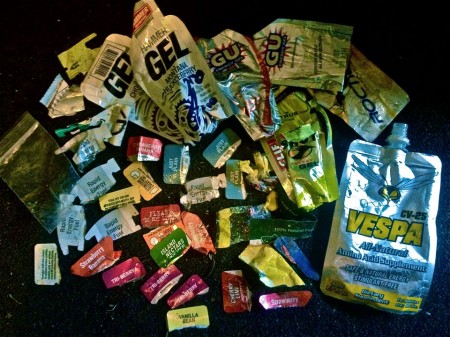 You shake your head and think bad thoughts about the idiot who left his trash on the trail. Your stride slips a little as you think, for a split second, of stopping and putting the wrapper in your pocket.

But you don’t want to stop right then and, besides, you don’t have any place to put someone else’s sticky gel packet. So you run past the litter and continue on down the trail, lost in your quiet thoughts.

This seems to be happening more and more frequently as more and more runners hit the trails. “The sport grew nine percent last year so lotsof new runners are moving from the roads to the trails, I suspect.” says Greg Soderlund, long­time race director of the Western States Endurance Run. “Littering isn’t acceptable in either venue but the new trail runners may not have the same respect and appreciation of the trails as the veterans do.”

Earlier this spring, a friend and I were running along the American River Parkway, after a popular, local road race had taken place. In a two-mile stretch, we saw a hundred or so gel packets lying on the ground.

As soon as I finished the run, I shot an email to the race director, who assured me they had a clean-up crew scheduled for the next day.

The following day, I noticed a significant improvement but there was still an unacceptable amount of litter along the trail. When I reached my turnaround point, I picked up a discarded plastic grocery bag and collected a couple dozen GU, Clif Shot, Hammer Gel, and Power Gel wrappers over a one-mile stretch.

You may not be surprised to learn I was feeling pretty critical of my fellow runners by the time I dropped the grocery sack full of trash into the garbage can. “But these are road runners,” I thought, “My trail running buddies are different, more respectful.”

The following Sunday, I went for a solo run from the Auburn Dam Overlook, down the American River Trail. It was a damp spring morning, and there had been a large number of runners on the trail the day before. The trail was showing signs of wear and tear from all those aggressive trail shoes and the weekend’s rain.

What surprised and disappointed me was the amount of litter on the trail.

I’m sure the folks dropping things on the Parkway were thinking, “It’s a race. The race volunteers will clean up after me.” But the people on the trail that weekend were just on a training run.

I have to admit, I’ve dropped things on the trail. We all have. You get back to your car and discover the zipper on your pack is open and a half dozen gel packs have gone missing. For this reason alone, we should all be willing to pick up the litter we see falling out of the pack of the person in front of us.

Sometimes, I’ll pick up a few pieces of trash and then get overwhelmed by the sheer volume of it, often making a mental note to bring a trash bag on my next run. If everyone was willing to pick up just one dropped gel packet or bar wrapper, that would be enough. But because most of us aren’t willing to pick up even one piece of trash, it accumulates. And that accumulation of trash, beyond the simple aesthetics of it, is where the risks lie.

‘Trail runners should understand that running on State Park trails is a privilege and we all need to pitch in and take responsibility and clean up after ourselves,” says Julie Fingar, American River 50 Mile Endurance Run RD. “Everyone, novice or veteran can benefit from hearing the message, ‘Pack it in, pack it out.”‘

If we truly love this sport and want to have continued access to these beautiful trails we run on, we need to take care of them. Not everyone who spends time in these woods is happy to see our trail races take place there. There are other user groups (horseback riders, hikers, bird watchers, hunters, environmental extremists) who aren’t particularly thrilled to see us racing through these wilderness areas. Most trail race directors will tell you that there are people actively working to stop their event from even taking place. It is critical to our sport that you do not provide them with more reasons to protest these events.

There are rules. They are simple rules and there are few of them.

As Fingar said: Pack it in, pack it out. If you drop something, stop and pick it up. Be responsible for your group. If you see that the runner in front of you has dropped something, tell them — or just pick it up yourself.

Save it for the trash can: If you are in a race,and in an aid station, you should try to put your garbage in a trash receptacle. (If you try and miss, don’t worry about it. The volunteers will cheerfully pick it up for you.) If you aren’t in an aid station, put the wrapper back in your pocket and throw it away when you get to one.

Finally, I would like us all to try an experiment. The next time you are on a run, make it a point to pick up the first empty gel packet or bar wrapper you see on the ground and put it in the trash. (Just one thing!)

We all occasionally drop something. If each of us makes it a point to pick one thing up during every run — the odds are good the most we’ll ever see is that one thing.

If this becomes the new normal, someday soon you could slip out onto that trail and shake off the dark and dreary concerns of daily living and see nothing but the trail as you dreamed it. A dream perhaps, but as Walt Disney said, “All our dreams can come true, if we have the courage to pursue them.”

Let’s have the courage to pursue this one.

Posted in General Interest | on: September 19th, 2012 by Craig | Comments Off on Don’t Trash The Trails