There are 3510 applicants entered in the December 5, 2015 lottery for the 43rd running of the Western States Endurance Run on June 25-26, 2016 (a.k.a. the 2016 Lottery). This is a 37% increase from the previous year. Recall that we tightened the qualifying standards beginning with the 2015 lottery and saw a slight reduction of applicants. 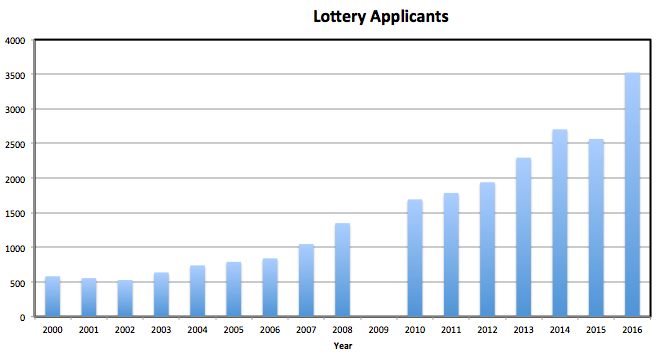 As described on our lottery page, each runner who enters the lottery and fails to gain entry into the Run (and otherwise doesn’t gain an entry via other means such as an aid station, sponsor, or Golden Ticket spot) will have additional tickets in the hat when entering the lottery the following year, thus improving the probability of being selected. Every lottery applicant will receive 2^(n-1) tickets in the hat where n is the number of consecutive years entering the lottery without gaining entry. That is, 1st year applicants = 1 ticket, 2nd year = 2 tickets, 3rd year = 4 tickets, 4th year = 8 tickets, 5th year = 16 tickets, 6th year = 32 tickets, 7th year = 64 tickets. 2010 was the first year we started accumulating tickets so maximum number of years for the 2016 lottery is 7, or 64 tickets.

Here is final list of 2016 lottery applicants and the pdf of the tickets that will go into the barrel.

We expect to draw 270 unique names, and have calculated the probabilities of being selected as follows: 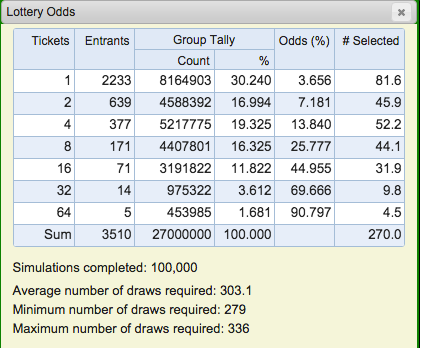 The lottery will take place at the Placer HS auditorium, in Auburn, CA. We will begin introductions a little before 8:30 a.m. PST and then begin drawing names shortly thereafter. We expect to be done by 11 a.m.

As names are pulled from the hat, they will be posted at http://lottery.ultralive.net/ as close to real-time as possible. There will also be a live video feed at our Ustream channel.

Good luck to everyone. 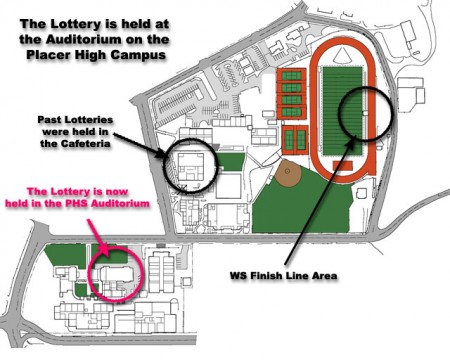