This article originally appeared in the 2018 WSER Race Program and was written by Joe Steinmetz, WSER Ham Radio Coordinator

One of the most challenging aspects of the Western States Endurance Run is its rugged, remote trails, most dating back to the Gold Rush era. As much as these trails pose a challenge for the runners, they also provide a challenge for communications and the team of volunteers responsible for tracking them.

In today’s connected world, we can take communications for granted.  However, there is little or no cell coverage at most of the 21 aid stations that span the 100 miles of the Western States Endurance Run. Where there is limited cell phone coverage, network congestion can make reliable communication problematic, which can hinder any emergency operation that may be required.

Because of this, the Western States Endurance Run has always relied heavily on HAM radio communications for the safety and well-being of the runners, crews and volunteers. HAM radio is also used to track the location and time of runners along the course.

There are 369 runners (and their associated crews) and over 1500 volunteers along the Western States course. Of the 1500 volunteers, there are roughly 100 HAM radio operators.  You will find the “HAMs” spread out along the course: as radio-equipped sweep runners, aid-station radio operators, and “Net Control” at the finish.  They all play an important role in ensuring every runner’s safety.

Net Control: Net Control is the nerve center of all race logistics, communication, and webcast. Race management is on station for the entire event, and they work closely with the HAM radio operators to track all runners’ status and ensure access to emergency services  to anyone along the course, if needed.  At any time, there can be as many as 20 people inside Net Control efficiently coordinating the status of all runners on course. 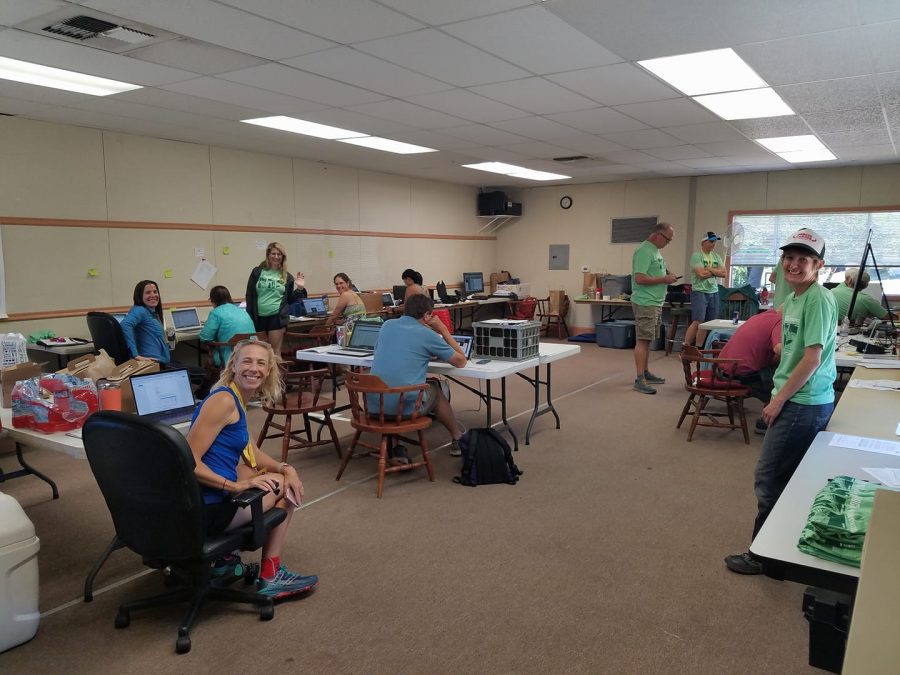 Because there is no power at most aid stations, all radio communications must be done “off the grid”. So, you may see radio setups connected to car batteries, solar panels, or small generators. Because some of the locations are so remote, large antennas at heights of 35 feet may be required to reliably get a signal back to Net Control. The figure below shows the radio tent, antenna and equipment at Lyon Ridge for a typical remote site. 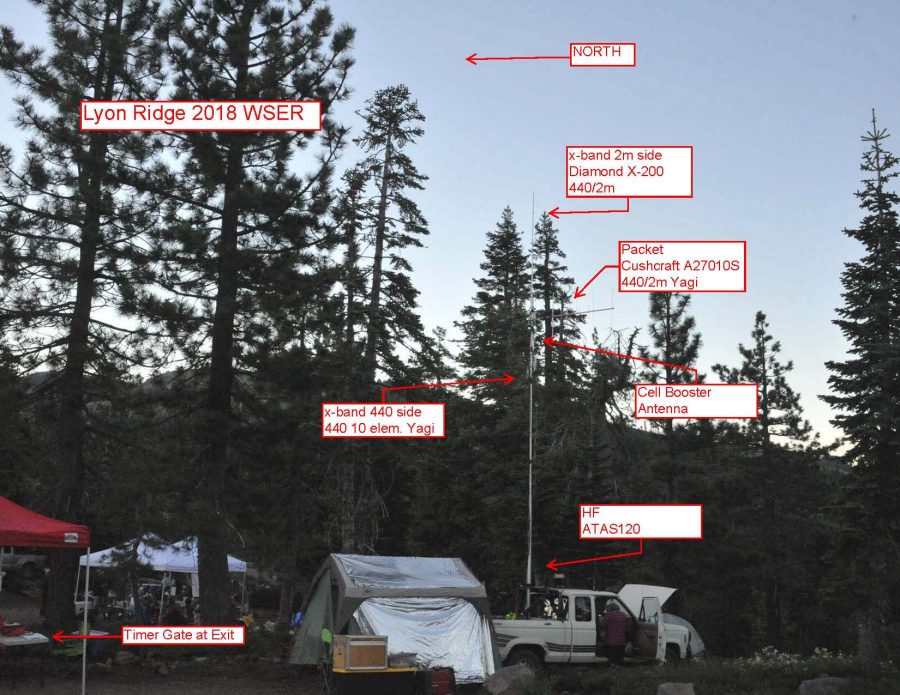 Sweep Runners: Sweep runners ensure all runners are accounted for between aid stations. Each sweep team has at least two radio-equipped sweeps that can communicate with Net Control along the trail.  In this way, Net Control can quickly be notified of any runners requiring medical assistance or evacuation. 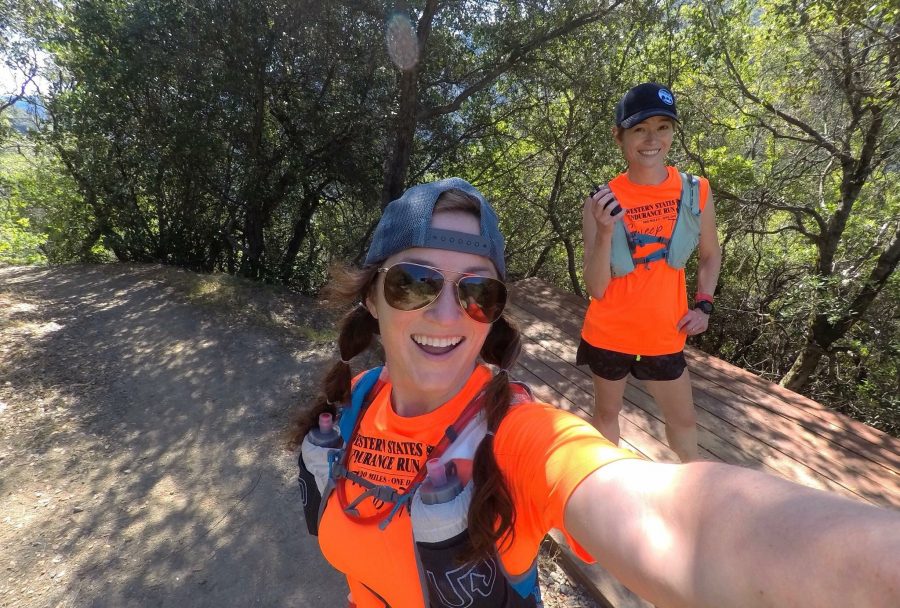 Repeaters: Linking all of these HAMs together is complex. Repeaters must be used by HAM radio operators along the race course as well as by Net Control for all voice communication. Repeaters are used to “relay” communication for one location to another. The Western States Endurance Run uses approximately 12 different HAM radio repeater systems to provide adequate coverage as runners spread out along the course. The repeaters are generally located on various mountain-tops. They are owned by HAM radio organizations and are provided to special events such as the Western States as a public service. The repeaters allow multiple aid stations to be active with communications simultaneously. They are used strategically based on their location relative to the location of the aid stations to ensure the best possible signal. 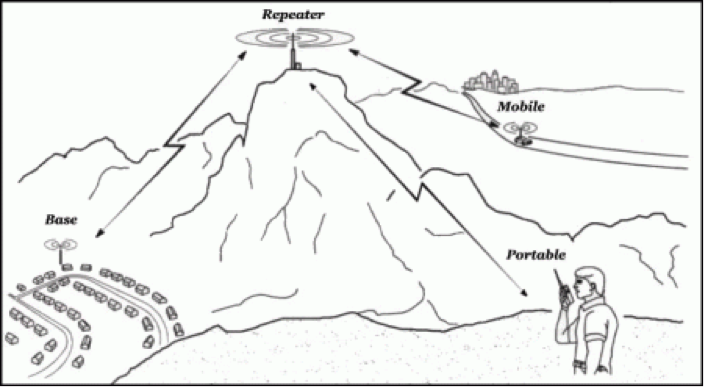 In some strategic locations, it may also be necessary to temporarily place a “portable-repeater” to ensure reliable communication for our sweep runners. These “portable-repeaters” will link in to other repeaters to reliably form a network of robust coverage throughout the course. The following figure shows how a portable repeater solves problems for the race.

WinLink: Voice communications are just part of  the Western States communication infrastructure.  It use to be quite tedious and error prone to verbally communicate runner numbers and arrival times at every aid station. To solve this problem, the Western States Endurance Run makes use of a technology called “WinLink 2000”. This technology essentially allows you to send an email over the radio consisting of a list of runner bib numbers and arrival times.  As amazing as this technology is, the speeds are still very slow at 1200 baud (remember dial up modems?) This is because of the complexity of reliably sending digital “data” over amateur radio. Despite the slow speed, because of the improvements in accuracy, WinLink can be used to communicate a runners status from the most remote location with minimal delay. 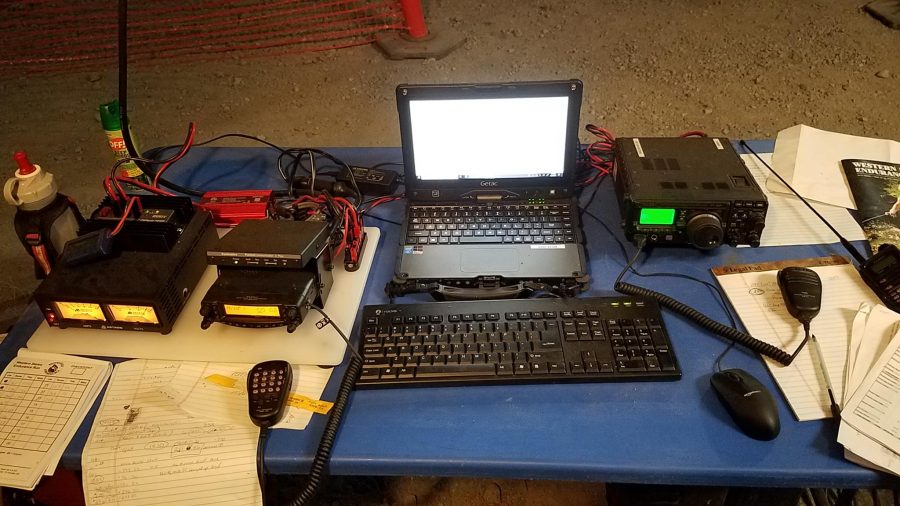 Digipeaters: WinLink equipped aid stations don’t use voice repeaters to get their emails back to Net Control. Instead they must find a particular “route” through various “nodes” before ultimately finding a suitable “gateway” to deliver the email to the internet. In some cases, there are gateways that can be directly accessed from an aid station. In other cases a message must “hop” from one node to another before finally being able to access the internet through a gateway. The ability to “hop” from one node to another is accomplished using a Digipeater or a KA-node. These are simply “digital-repeaters”, just like the voice counterparts, but optimized for digital traffic. Some are located on high mountain-tops, just like the voice repeaters, while others are temporarily placed in a strategic locations just for the race.

Hot Spots: There are just a couple of aid stations with reliable access to cell phone data networks. At these aid stations the runner bib numbers and arrival times are transmitted directly into the webcast database.

Keeping runners, crews and volunteers safe is our #1 priority. We are very appreciative of all the HAM radio volunteers as well as the local HAM radio community for making valuable radio infrastructure available to Western States Endurance Run.